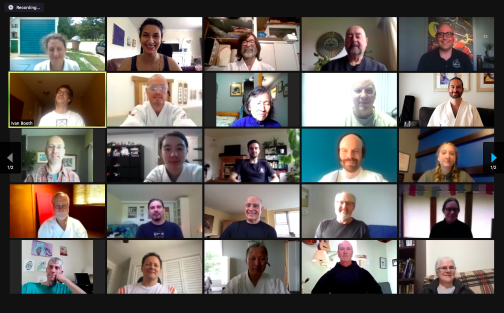 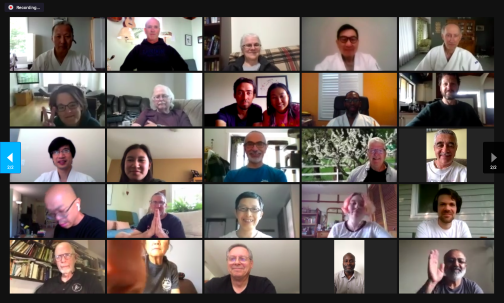 Sometimes we go into a virtual event and we have an expectation of what that may look like: a lot of awkward silences, verbal cues to unmute or mute oneself, an excess of screen time…and to an extent, there were those inevitabilities of online event hosting, but the seminar managed to transcend those. Mainly due to the community it drew.

During our breaks, people chatted, whether through the chat function or un-muted themselves and spoke to each other, as they would have at a regular seminar. We came through, from coast to coast and beyond (participants from the US, Russia, Peru, Colombia, Japan and Indonesia were present). We averaged 85-99 participants consistently throughout both days. Osawa Shihan's class saw as many as 130 screens tuning in.

Osawa Shihan was a highlight. He gave a truly generous and attentive class and responded to our members' questions in the Q&A with such care, contemplation, detail and candour. We thank him for his time, love of Aikido and devotion to his students.

Panel discussions, workshops and a historical lecture ignited strong reactions from the chat…conversations that will continue in the months to come. An opening for the Canadian Aikido Federation to organize more spaces for programming and discussions of these kinds, whether virtually or in person, in the future. Thank you to the moderators (Collin Brown and Ben Peacock), panelists (Scott MacMillan, Keira Loughran, Bruce Choy, Myrna Harrod-Taniguti, Michelle Lapointe, JF Chapdelaine), workshop facilitators (Natan Cheifetz and John-Patrick Foster) and George Hewson Sensei for their labour and prep work.

Virtual classes led by our talented CAF instructors — the handful we had time to feature. Their class offerings were food for thought: highlighting the Aikido basics in creative ways, with each instructor sharing their own perspective. A reminder of the multitude that Aikido practice tends to embody. Thank you Sensei Michelle Lapointe, Steve Erickson, Don Ragush, Pat Olson, Ben Peacock, Hilary Dawson and Scott Macphail.

A heartfelt tribute to Kawahara Shihan on the 10-year anniversary of his passing shared archival footage and candid photographs of Kawahara Sensei. Such speakers as Sensei Ishu Ishiyama, Yumi Nakamura, George Hewson, Jim Barnes, Peter Maclean and Don Ragush, as well as David Skakoon, David Humphreys and Bill Heron…shared stories and powerful memories of Kawahara Sensei — a testament to his influence on each of their lives and to Aikido here in Canada. Thank you to Pat Olson Sensei and to Jim Redding for organizing and hosting this beautiful tribute.

Thank you to Sensei Yumi Nakamura, Jim Barnes and George Hewson for facilitating everything with Osawa Shihan, Megan McCarthy of the Aikikai Foundation at Hombu Dojo for the live English interpretation and Nicolas Tremblay of Quebec City, who provided live French interpretation. Thank you to Terumasa Hino Shidoin for being uke and assistant to Osawa Shihan.

Special thank yous to Barb Wolfe and Pat Olson, who gave support behind the scenes.

The seminar was not meant to be a perfect substitute for our annual camp. It was a way for us to see each other again. Talk a little. Check in. Be inspired by Aikido again. We look forward to reconnecting and growing these connections, however which way the future unfolds in the coming months. But more than anything, we look forward to practicing Aikido in person again with you.

A letter to members from the CAF Board: Returning to safe practice.